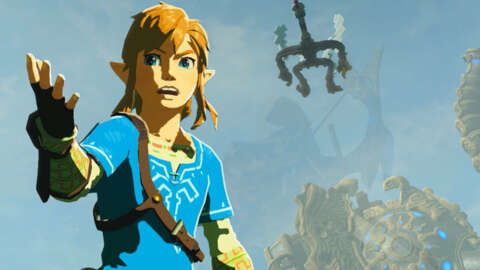 In the video above, wWe cover 48 tips and tricks that aren’t quite as well known, ranging from secrets to glitches, some that are pretty simple some and others that are fairly complex. With Breath of the Wild having Because the game has been out for four years at this point, players have found some amazing things, intended or not, that seem to keep the game and its sense of discovery feeling constantly fresh. Of note, Here we point out some secrets in Kakariko Village and Gerudo Town that the developers left that aren’t quite as well known in Kakariko Village and Gerudo Town, as well as strange techniques, like how to permanently disable that cause a Guardian to be permanently disabled, and covering yourself with impaled arrows. With Breath of the Wild’s highly anticipated sequel is still nowhere to be found, these techniques should help you but players continue to push what you’re able to do in the original game.

I know what you’re thinking, “I’ve watched every youtube video and seen every tips and tricks guide, I know everything already”. Well I guarantee even after four long years of Breath of the Wild being released, even seasoned veterans will learn at least one thing new here. This list includes regular secrets and some glitches, ranging from simple to complex things, so if you enjoy content like this let us know by giving us a simple like! It helps more than you think. Alright, lets jump right in-

1-Hinox’s and Stalnox that attack with trees will obviously damage Link, but Stalnox with bent palm trees will miss Link completely because of the bent hitbox of the tree.

4-Only in Hyrule Castle, all champion abilities have a much shorter cooldown, this stacks with the rune “plus” upgrades. Outside of Hyrule Castle, the cooldown is normal.

7-Holding ZL while swimming will give you a different swimming animation. This is a direct reference to the Ocarina of Time swim.

8-If you see a Lynel charging you, either hold an item, bow, or bomb in your hand, hold ZL, and just hop backward. You’ll strangely dodge right through it’s charge.

9-Moblins have a lunging spear attack that has a huge flurry rush window. It’s such a long time that you can flurry rush the same attack twice

10-In Kakariko village, there is one, singular apple that someone hid underneath this bridge

12-On death mountain you’ll usually burn to a crisp without the right gear or elixir. But can reset your burn timer by spin attacking with a heavy weapon

13-You can also simply douse yourself with a regular chuchu jelly to get 30 seconds of heat invulnerability. This also works in the hot gerudo desert.

14-Speaking of the gerudo desert, if you’re completely out of shade and are burning up, you can use a big weapon, such as a crusher above your head as shade. Funnily enough, this is also walks faster than normally wading through sand.

15-Everyone reacts similarly to you pulling out a bomb in front of them, with most key characters having some sort of special dialogue. But the most special dialogue is with Olkin the pumpkin farmer at night when he’s not farming, which is when he’ll say this- “A Blue Pumpkin?!”

16-In Master Mode, all enemies are upgraded one level, which means there are no low level red bokoblins. Except for one lonely one in the world riding a horse below the stasis shrine.

17-There are three distances you can throw items, pressing dpad down will far-throw, a regular throw will go in front of you, and using magnesis first then throwing will drop it at your feet

18-It’s possible to play Breath of the Wild in first person without a mod, but it’s pretty difficult to pull off. We have a guide all about it though!19-When you run out of arrows in your quiver, not only is your quiver empty but your stance changes as well, and firing the bow will just make a strumming noise

20-You can lift a stalnox with a magnesis chest. They will start hurling explosive barrels out of nowhere at you though.

21-If a Bokoblin is unarmed and tries to melee you, stand still and parry over and over. Your forward parry movement and the Bokoblin’s strange attack angle puts you in a perpetual state of missing high fives.

22-Every large enemy in the world can be crouched under, this includes guardians, lynels, and talus’. Hinox’s can be run under.23-If you have completed the champions ballad DLC, warp to Divine Beast Vah Ruta, look up, and wait 30 seconds for a really weird surprise.

24-Pebblets can be picked up and thrown or dropped to defeat them, but you can also simply run them over with the master cycle.

25-The Master Cycle has a very strange glitch to the rear tire specifically, you can gain bullet time straight from the ground jumping over the rear tire at a 45 degree angle. Now you can REALLY windbomb anywhere!

26-The eye is not the guardians only weakspot, the blue engine at the bottom is also a weakspot as well.

29-At the Lake Akkala Fairy Fountain, there is a massive hole in the wall the developers forgot to fill in correctly. There are several of these hidden around Hyrule as well. With how big Hyrule is, it was bound to happen.

30-Most people know about using sunshrooms and spicy peppers as updrafts, but they can be chained together as long as you don’t directly shoot the ingredient, just shoot next to it to set it on fire but not knock it away

31-If you fire single shot regular arrows at a wooden boomerang, you can completely cover a wooden boomerang with arrows, and even sheathe it, and retrieve your arrows back whenever you want, sort of becoming an arrow pincushion.

32-In Hateno Village, the villagers will have special dialogue and even small rewards when you carry a blue flame. But also the kids will surround you and admire the pretty flame.

33-With certain glitch techniques, Link has the ability to actually body slam his opponents. By thunderclap rushing, pressing B, then unequipping your weapon, or by skew bouncing above the enemies head, Link’s own body momentum smacks the enemy, doing 8 damage.

34-When you exit the scope, you’re temporarily invisible. Use flurry rushes or bullet time to extend that time and look invisible.

35-Cut down a tree, stasis it, then throw some wood down under it. This will allow you to make a fire when it’s raining to pass the time. Break the tree to get your bundle of wood back!

36-If you ever looked closely at your map when being attacked by Guardians, all the ones that have noticed you will be pulsing red on your map. Ones that have lost track of you but are still alert are pinged as a regular red dot.

37-If you land on top of a Guardian, jump then shield surf on top of it. You can just chill here like this, and the Guardian won’t move.

38-When targeted by a Guardian, try and selfie pose. It will sometimes target the camera instead of Link.

39-If you’re ever out of stamina, hold ZL and walk instead, it’s faster than normally walking.40-In one of the buildings in Gerudo Town, there’s a scarecrow with a funny hand drawn face, Risa uses it to practice pickup lines for Voe men in secret.

41-Moblins that throw bokoblins do damage depending on the thrown Bokoblin’s melee damage, NOT the Moblin’s throwing damage.42-Throwing live animals off of a tall ledge will make them… float strangely.

43-Also, releasing any live animal normally will make them run away. But if you hold the animals, throw them, then bomb yourself quickly, they will then spawn in normally. You can make a swarm of animals this way.

44-This is also a technique used to get extra fairies, and you can get a total of 21 fairies this way.

45-When near a cooking pot the game will automatically bring up the food ingredients menu no matter which menu you were in before, because it knows you want to cook.

46-When you find a ring of rocks with one missing for a Korok seed, the missing rock will always be in the direction from the middle of the circle out to where the one is missing.

47-You can disable a guardian and have it be friendly by using Urbosa’s fury, then using stasis. It will simply sit there and look around aimlessly, and it won’t care if you attack it.

48-You can also do a visual delayed thunderstrike on a guardian, by using Urbosa’s Fury twice, the second lightning strike will come 8 seconds later. It looks pretty epic in slow motion!

49-If you continue to beat the Champion’s Ballad blights over and over, you will continue to get unique dialogue and lore for each champion, including some amazing voice lines.50-The Stone Smasher, Boulder Breaker, and Lynel Crusher all have a special property, they are heavy enough to push stone objects when magnesis’d, this includes stone switches, anvils, and even open AND close stone doors. This can’t be done with any other weapons.

And that’s it! Breath of the Wild is a journey that doesn’t stop, and there is always something new to learn, even for a veteran such as myself. If you enjoy Breath of the Wild content, be sure to check out our other content including Experts React and breakdown videos! And for everything else, stay tuned right here on GameSpot.

Forza Horizon 5 – Everything You Need To Know