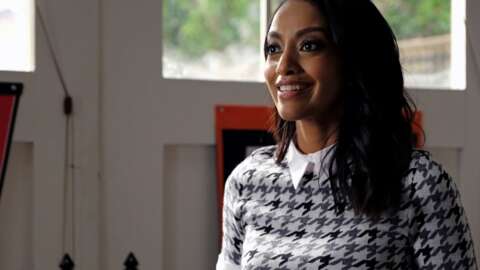 Kelly Olsen (Azie Tesfai) will be picking up the mantle of Guardian in the twelfth episode of Supergirl’s sixth and final season, titled “Blind Spots.” She is taking over the role from James Olsen (Mehcad Brooks), who left the series back in Season 5. Take a look at Kelly in full Guardian costume in Tesfai’s celebratory tweet below.

While this superhero, character, & my process of writing her debut represents many ‘firsts’… the one I’m most proud of is cultural:
The first Ethiopian or Eritrean superhero EVER! 🦸🏾‍♀️🇪🇷🇪🇹 pic.twitter.com/VeujAFxcTK

Making the moment even more special is the fact that Tesfai co-wrote the episode alongside co-producer J. Holtham. It will also be directed by an Arrow-verse regular, David Ramsey, who is slated to appear in it as his fan favorite character, John Diggle. A full description of the episode is not yet available, but it will deal with and address racial inequality.

Kelly’s debut as Guardian has been a long time coming in Supergirl, first being teased back during the Arrowverse crossover event Crisis on Infinite Earths which began running back in 2019. Thankfully the long wait is nearly over. “Blind Spots” is scheduled to air on the CW on September 21.

While Supergirl may be coming to an end with Season 6, many of the CW’s Arrowverse shows have already been . Superman & Lois, DC’s Legends of Tomorrow, The Flash, and Batwoman will all be continuing on into next year.