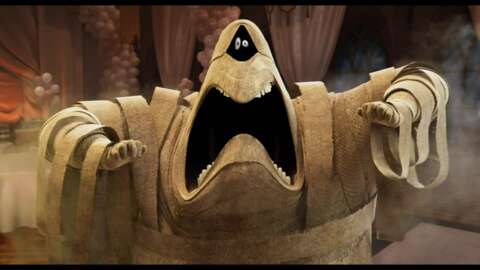 Hotel Transylvania: Transformania has moved back to October. As reported by Deadline, the fourth movie in the popular animated franchise will now hit theaters on October 1.

The Sony movie was previously set to be released on July 23, having originally been scheduled for December last year. Hotel Transylvania: Transformania will now be released on the same day as another spooky animated film, Addams Family 2, and the highly anticipated sci-fi movie Dune. The July weekend it has just exited offered competition from M. Night Shyamalan’s thriller Old and the GI Joe movie Snake Eyes.

The Hotel Transylvania series focuses on the adventures of the monsters who live in the hotel of the title. The cast of Hotel Transylvania: Transformania includes Andy Sandberg, Selena Gomez, Kathryn Hahn, Keegan-Michael Key, Steve Buscemi, and David Spade. The one cast member not returning however is Adam Sandler, who played Dracula in the other films, with this the role now played by Brian Hull. The movie is directed by Jennifer Kluska and Derek Drymon, and written by Genndy Tartakovsky, who helmed the previous three films.

The first movie was released in 2012, and the series has grossed over $1.3 billion at the worldwide box office so far. There has also been a Hotel Transylvania animated Disney Channel show, two short films, and several video games.

For more, check out GameSpot’s guide to the biggest upcoming movies of 2021 and beyond.

From Death’s Door To Cris Tales, A Lot Of Awesome Games Came Out Today