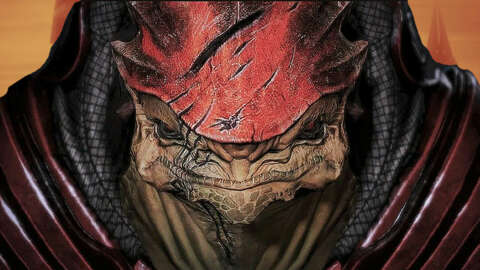 While many long-term fans are excited to dig back into Mass Effect with Mass Effect: Legendary Edition, there are also plenty of new players picking up the beloved trilogy for the first time. There’s no shortage of lore in the series—it’s incredibly dense with it—so if you’re new to Mass Effect, here’s a primer to get you started. Or, if you’re a veteran fan, a way to refresh your memory before you play the remaster.

In the above video, Jordan Ramée discusses the fascinating history of the ferocious Krogan: a species bred for war. From the unusual anatomy that makes them almost impossible to kill to their warmongering nature, the Krogan are regarded as the brutes of the galaxy, always spoiling for a fight.

Their nature made them very useful to the Citadel Council when faced with the Rachni, a species threatening to conquer the galaxy. Unfortunately, the Krogan ran rampant, conquering numerous planets and breeding faster than they could be killed. The solution: a genetic mutation called the Genophage, which was designed to cut birth rates among Krogan dramatically in order to keep them in check.

The Genophage plays a huge role throughout the Mass Effect trilogy and informs some of the biggest decisions the player has to make throughout the games. For more lore videos, make sure to subscribe to gamespot.com/gamespot. Mass Effect: Legendary Edition launches on May 14 on PS4, Xbox One, and PC.

Forza Horizon 5 – Everything You Need To Know