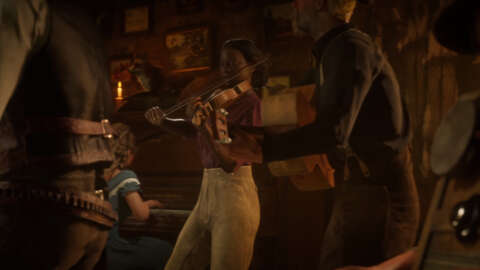 Bust out your ten-gallon hats New York, a live concert of Red Dead Redemption 2’s music is planned for this upcoming summer. The concert is scheduled as part of the upcoming Tribeca Festival and will take place on June 10.

The live Red Dead Redemption 2 concert will take place in New York’s Battery Park, on the southern tip of Manhattan. Special care has also been put into the timing of the concert. It’s set to begin at 8:30 PM ET, just as the sun sets in New York.

Performing will be the producer of Red Dead Redemption 2’s soundtrack, Daniel Lanois, and his band, as well as some other unnamed special guests. It’s possible that some of those special guests could be other musicians that contributed to the game’s OST. Red Dead Redemption 2’s soundtrack is sprinkled with popular musicians, such as D’Angelo, Rhiannon Giddens, and Willie Nelson.

A tracklist for the event hasn’t been listed, so we unfortunately cannot confirm that the housebuilding song will make it into the event. There are some great songs on the Music of Red Dead Redemption 2 soundtrack that could be played at the event though, including “Unshaken” and “Cruel World.”

As of writing, tickets for the live Red Dead Redemption 2 concert are not on sale. Likewise, ticket prices for the show are not available yet.

The Red Dead Redemption 2 live concert is part of Tribeca Games at the Tribeca Festival. The event will also have a games spotlight featuring unreleased games and interviews with developers. Anyone that can’t attend the Tribeca Festival can also take part by signing up to demo games through Parsec.

GameSpot may get a commission from retail offers.